Baby Night Shift
Two weeks ago, friends who have a son that is three weeks older than Baby G mentioned that they sleep in shifts. One of them sleeps in their guest room while the other stays in the master bedroom with the baby. They switch halfway through the night to allow each of them to get a few hours of uninterrupted sleep. Gary has always been willing to help at night, encouraging me to wake him up if I needed him to burp, swaddle, or change Baby G, but I’d fallen into the habit of just doing most of it myself after nursing her. After talking to our friends however, we decided to try splitting the night into shifts. Instead of going into a guest room (which for us would require setting our air mattress up in the office), we put in ear plugs when it’s not our turn.
Earlier this week Gary came down with a cold I insisted that until he recovered he go to bed at night, put in earplugs, and do his best to sleep as much as he could. I got up with Baby G for his shifts and mine throughout the night for two nights. That only reinforced my belief that single moms, or moms with little or no support from their significant others are heroes, and I am extremely blessed to have a husband who is willing and able to help out as much as he does. By the end of the second day, Gary was starting to feel better, and I was starting to feel as if I caught his cold. So we switched, with him taking most of my shift and me only waking to do a late night feeding before passing Baby G back to Gary to be burped and changed. Fortunately, I was feeling much better the next day.
Sleeping in shifts has been a huge help, even if it’s not always perfect. A gassy baby during your shift, or a change in schedule, can make it feel like I still haven’t gotten much rest, but it’s a definite improvement.
1st Babysitter!
We left Baby G with a babysitter for the first time earlier this week. The fact that it was my sister, who’s also my best friend, and her husband who were babysitting made it a lot easier to leave her. She was so interested in looking around her new surroundings that she didn’t settle down for a nap and ended up getting overtired and crying herself to sleep. Her Aunt Katie and Uncle Matt had a great time spending time with her though, and she was happy as could be by the time I picked her up. 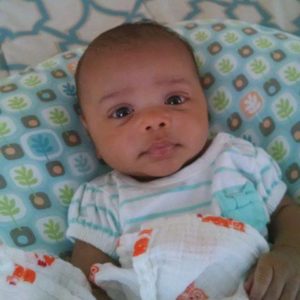 I’m so thankful for the Gary’s support, for our free “babysitters” who are so in love with their niece and willing to take time out of their own busy schedules to spend the evening with her, and all of the other family and friends in our lives.
Who are you thankful for?