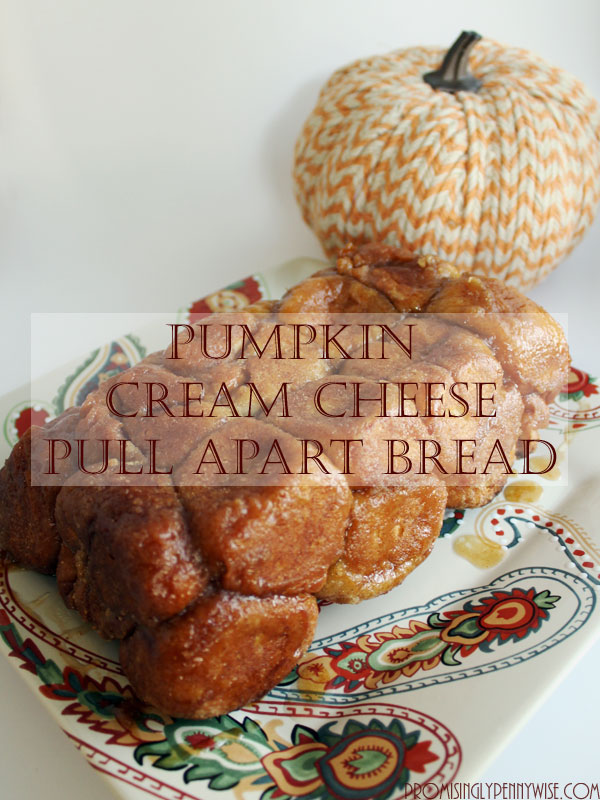 When Gary posted a recipe for cream cheese and chocolate stuffed monkey bread to my Facebook wall, I immediately began thinking about how I could make it into a fall recipe. The first hints of fall are just starting to work their way into the air here in Florida. Though I know that Florida weather is fickle, and it could feel like summer again tomorrow, I’m enjoying it while it lasts!

If you’ve never had monkey bread before, it’s a sweet pull-apart bread, perfect for deserts or a sweet breakfast. It’s usually made by rolling pieces of biscuit dough in cinnamon and sugar, tossing all of the pieces into a budnt or loaf pan, drizzling melted butter and sugar over top, and baking until golden brown. There are tons of variations of monkey bread.  While the chocolate cream cheese monkey bread sounded good, I thought a pumpkin cream cheese version would be perfect for the start of the fall season.

There are two ways to make this Pumpkin Cream Cheese Pull-Apart Bread. A quick method, using store bought biscuits, and a from scratch version using a slightly healthier whole wheat biscuit (see the notes at the foot of the recipe for the from scratch method). 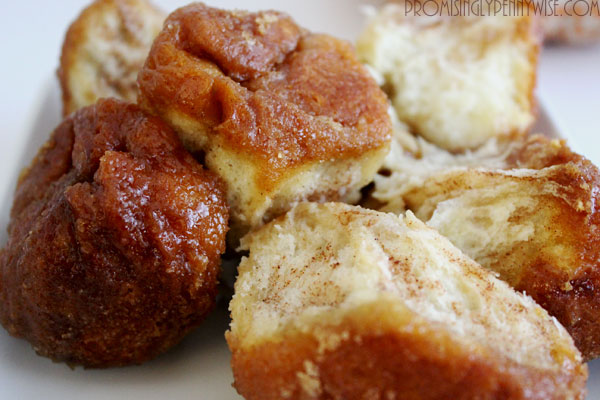 I made this recipe for the first time one Saturday when Gary and I were home all day. That was a mistake. A recipe this good can quickly disappear even when there’s just two of us here to eat it. The next day, we decided to go to a get together with friends that evening. I jumped at the chance to share this recipe, but there were only a few pieces left from the day before.  It was the perfect opportunity to try the quick method. Gary ran to the store and picked up some biscuits, and I got to work.

Though  the quick method, using store bought biscuits, was delicious and got great feedback, Gary, preferred the from scratch version. While it was a little more time consuming to make, I liked knowing that the biscuits were a little more wholesome when making the recipe from scratch. The from scratch recipe also uses part whole wheat flour, so you can feel a little less guilty about consuming all of the sweet, buttery, gooey deliciousness of this bread.

The pumpkin cream cheese filling for this bread is lightly sweetened, since there’s so much sweetness in this recipe without it. If you wind up with some left over filling at the end, it makes a perfect dip for sliced fruit! 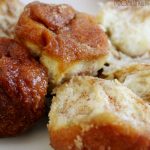 Notes:
To make the from scratch version, replace the Grands! Biscuits with this recipe (click here). I made the following changes to the recipe however: I omitted the honey, and I diced a refrigerated stick of butter and mixed it with the flour using my hands until the flour mixture was crumbly, rather than grating a frozen stick of butter as suggested. 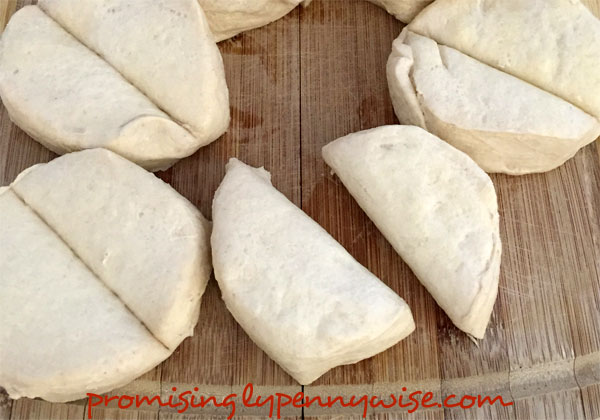 Cut the biscuits in half. (If making from scratch, refrigerate the cream cheese mixture while you make a batch of biscuits.) 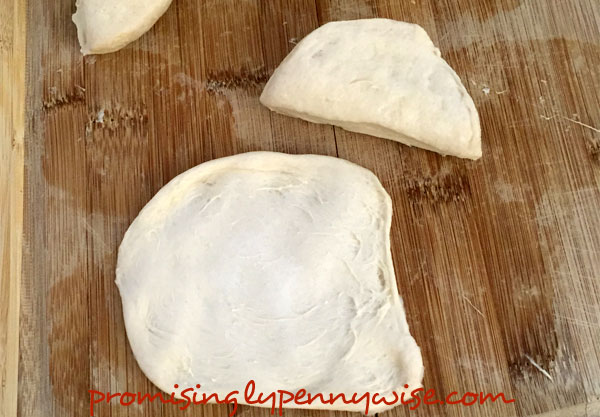 Spread the dough into a circle. 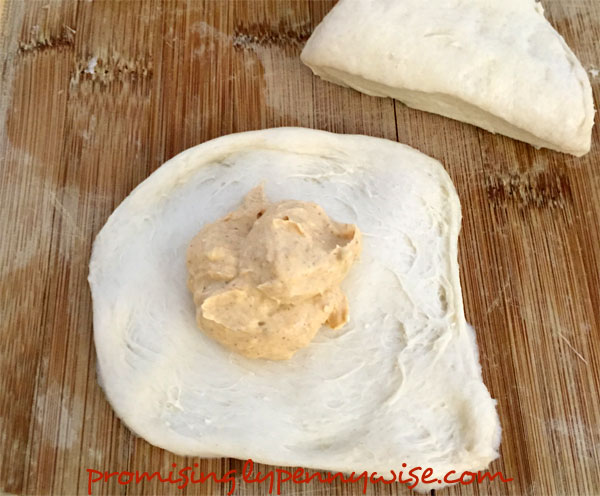 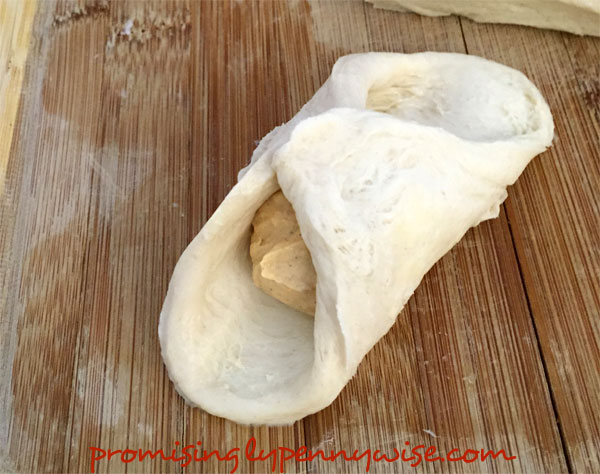 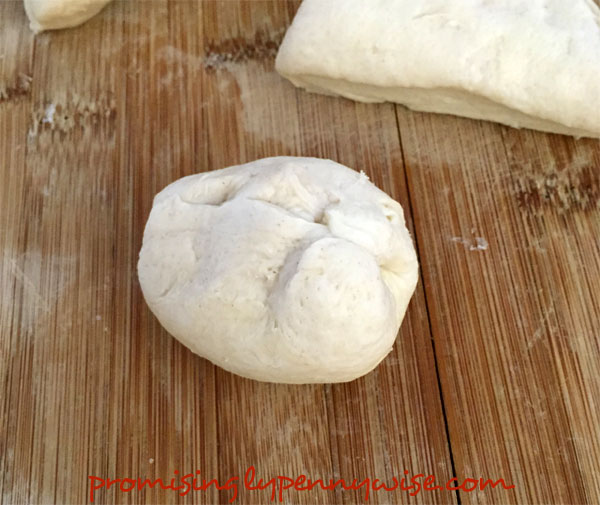 Pinch all of the edges together to seal.

Repeat with the remaining biscuit pieces. 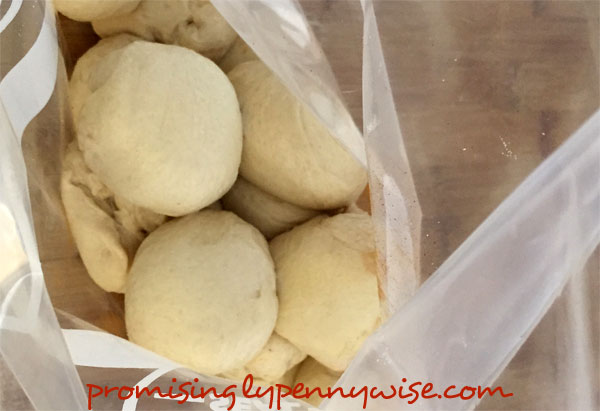 Combine cinnamon and sugar in a bag, then gently add the dough. 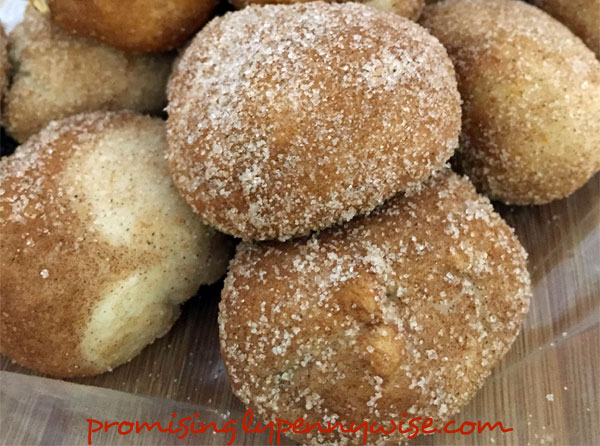 Gently shake to roll the pieces to coat with cinnamon and sugar. 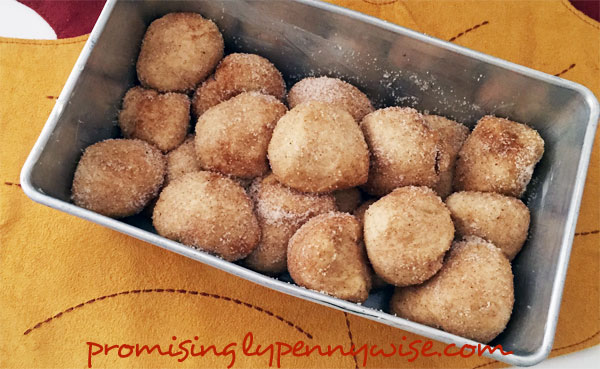 Place pieces in a loaf or budnt pan. 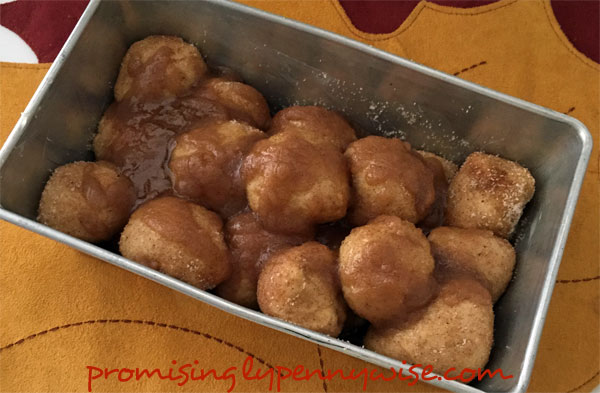 Bake, allow to cool and enjoy!