After a very busy start to September, I decided to make it a priority to post one of the many recipes that I’ve been working on. Though I’m only out of the house for about ten hours a week for my new job, that ten hours has taken away from my time to get things done around the house, like blogging.

I was in the middle of dutifully writing a bog post for Pumpkin Cream Cheese Pull-Apart Bread when I realized that today was Talk Like a Pirate Day! I didn’t know that Talk Like a Pirate Day existed until a parent of one of my students showed up in full pirate gear to pick her son up from school last year. She explained that Krispy Kreme Doughnuts gives away a dozen doughnuts to each person who comes in dressed as a pirate. I didn’t get a chance to participate in the fun last year, so I was looking forward to it this year.

I pulled together a flowing shirt, large belt, scarf, and boots from my closet to put together a costume for myself. For Baby G, I cut a worn out onesie into a vest and used safety pins and a piece of black felt to make her a hat. At the last minute I took the stuffed parrot off of her crib mobile and tied it to the shoulder of her vest. Our costumes wouldn’t have won any prizes, but they weren’t bad for being pulled together in less than thirty minutes from items we already owned. 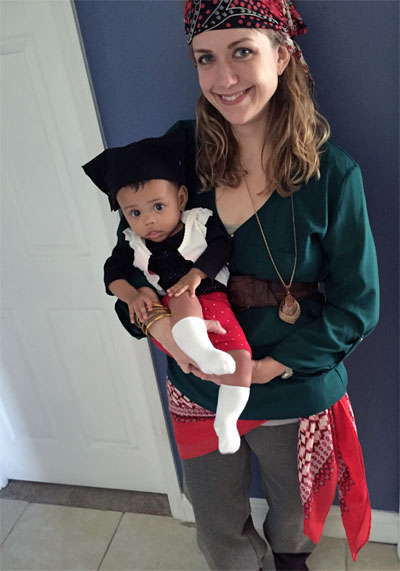 Once we were all dressed up, we set out on our mini-adventure. The closest Krispy Kreme was about forty-five minutes away. Baby G happily played with a toy and napped in her car seat on the way.

When we got there, the Krispy Kreme restaurant was packed with families of pirates, and a few plain clothed individuals who just wanted to buy some doughnuts. Baby G and I stepped into line to wait.

When we finally got up to the front, the lady at the register called for a coworker to get a box of doughnuts for me since I was dressed up. Then, she looked at Baby G, smiled and called “Get another one!” Both of the ladies at the counter were so sweet, talking to Baby G and commenting on how cute she was, in the middle of what is probably the busiest day they’ve had in a while. 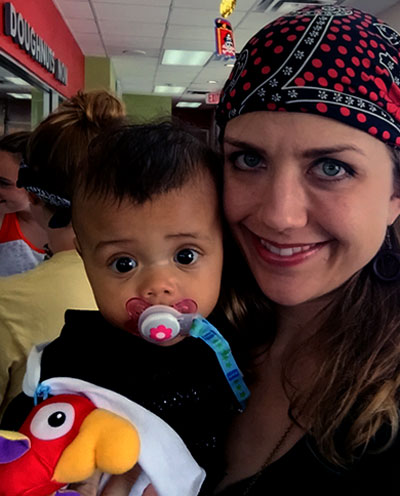 So, Baby G got to go on a little adventure today, and we walked away with two dozen free glazed doughnuts (the majority of which will most likely go to church with me tomorrow before Gary and I eat them all). 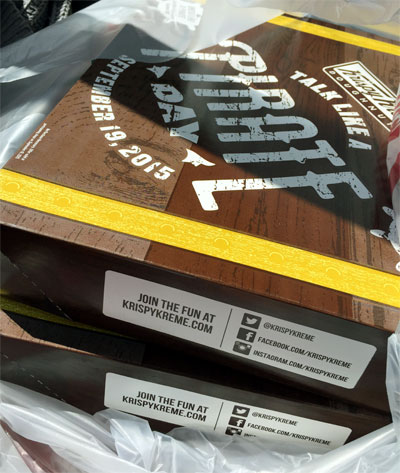 And the Pumpkin Cream Cheese Pull Apart-Bread Recipe is almost done. Check back in the next couple of days for the recipe!