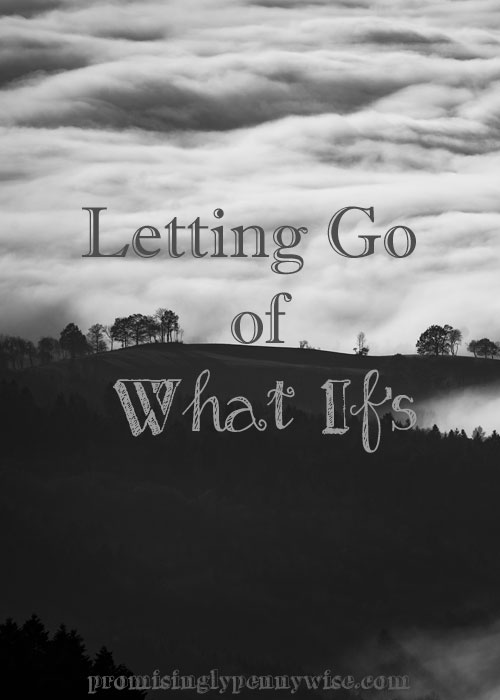 When Baby G was just a few weeks old, it seemed like I would hear stories of a young child or baby passing away every few days. On Facebook I saw that a distant cousin’s two year old lost her battle with cancer, a former coworker posted that friends of hers lost their own two year old to cancer as well, two news stories in a matter of weeks reported that infants in the state of Florida died after being forgotten in a hot car, and a news story stated that a three year old drowned in a pool at a Disney resort after slipping away from his parents. I knew better than to let the “What if…” thoughts in, but I’ll be honest: They got to me. I started to allow my mind to wander down the “What if…” path. What if I lost Baby G in that manner? How would I be able to deal with grief that great? How could the parents I read about deal with their grief?

Under the surface of all of the “What if” scenarios lay the unspoken thought: “If something tragic happens you won’t be able to handle it unless you prepare for it now.” Prepare for it now. As if worry can ever prepare us for what’s coming! It’s such an obvious lie, but I hadn’t let myself see it. I was trying to control something that I couldn’t control. Trying to give myself the illusion that I have control over the future, instead of trusting the future to the one who is in control.

The second lie lurking under the surface of my worry and “What if…” thought pattern was: “If something terrible happens, God might not be good enough to get me through it. What if he’s not there in my suffering?” I was doubting the goodness of God.

Now, I’m aware that being a Christian does not guarantee we will live a life devoid of suffering. The Bible never makes those promises. The problem was, when I began to worry about suffering, at heart I was questioning the character and goodness of God. I was questioning whether it was true that he would be enough for me, that he would be there for me, even in the darkest situations.

In several places in the Bible, Jesus tells us not to worry. Here’s the thing, Jesus doesn’t toy with us by telling us to do something impossible to do. If he tells us not to worry, then we have the ability to choose not to worry. That doesn’t mean it’s easy, especially at first. If, like I had, you’ve allowed worry to become a pattern, it may seem difficultto change the familiar pattern in your way of thinking. But, difficult or not, it is possible!

But why do we need to give up worry? What’s really so bad about “What if’s”?

According to Corrie ten Boom, a very wise woman who lived through the loss of her dearest family members while imprisoned in a concentration camp, “What if’s” (aka worry), does nothing but steal the strength you’ve been given for today. 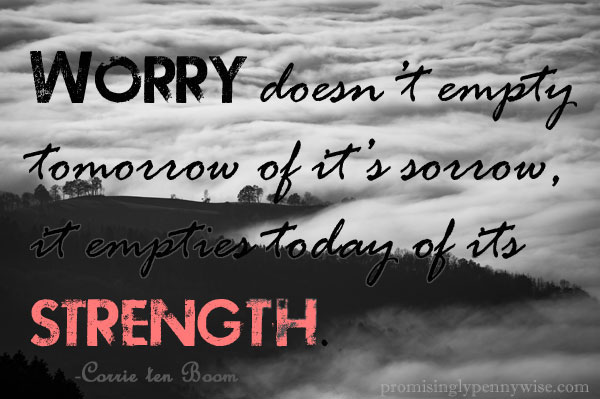 When we are so focused on preparing for a future that we may not face, we are unable to focus on the things we’ve been given to do today. Not only do we miss out on accomplishing the tasks we’ve been given for today, we miss the joy that is available to us now.

I love how The Message version of the Bible puts it in Matthew 6:34:
“Give your entire attention to what God is doing right now, and don’t get worked up about what may or may not happen tomorrow. God will help you deal with whatever hard things come up when the time comes.”

We’re meant to focus on what God is doing right now, not on what he might do someday. And did you hear the assurance in the second part? He will help us deal with the hard things that come. We don’t have to fret about how we’ll handle hard things when they come because he will help us when the time comes.

Letting go of “What if’s” allows us to be productive, and it enables us to enjoy the present instead of letting it become clouded by worries of the future. But I do have one last “What if…” for you to consider.

What if you spend your whole life trying to prepare for disaster, worrying about how you will handle it when it comes, and worrying away your present, only to reach the end of a long healthy life to find that the disaster you were waiting for never came? Would it be worth all the time and emotion spent?