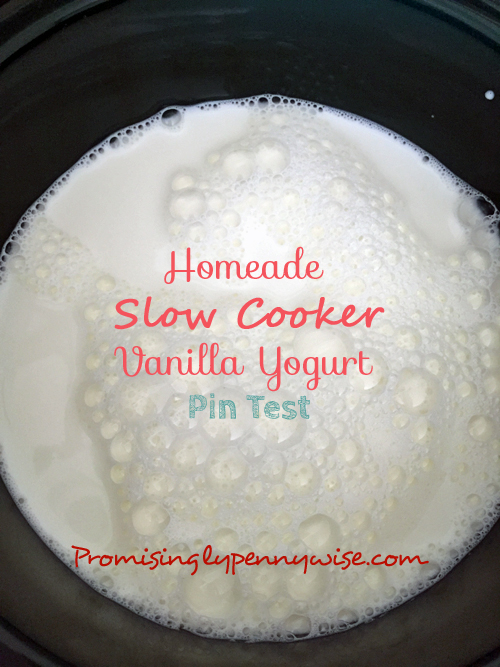 I’ve said it before, I love my slow cooker. Besides being useful for making hot dinners in advance, I use mine to cook so many things that I’d be stuck at the stove monitoring otherwise. Being able to set it and forget it is a lifesaver with a little one. Once a meal is in the slow cooker cooking, I don’t have to worry about stepping away to take Baby G to the nursery for a nap or bedtime. It’s also helpful in preparing thrifty recipes. My favorite money saving items to cook in a slow cooker are beans (so much cheaper than canned!) and chicken stock.

When I came across a recipe for Slow Cooker Yogurt on Pinterest, I was fascinated. You may come from a family that makes homemade dairy products all the time, but not I. Sure, I’ve tried homemade ice cream made with an ice cream maker, and I once made homemade butter at school, but yogurt? I didn’t know people made their own yogurt, much less in a slow cooker. I clicked on the link and eagerly read the instructions. When I started reading about the special digital thermometer you had to carefully run into the slow cooker, I realized that recipe wasn’t for me. Maybe one day I’ll shell out the money for a fancy themometer, but it’s just not in my budget right now.

That’s why I was so excited when I came across www.joyfullythriving.com‘s post about how to make homemade vanilla yogurt in a slow cooker. No thermometers involved! I pinned it right away.

I promise, not every pin test automatically passes. In fact, I just made a dish the other day that I couldn’t say passed the test, but this yogurt? It passed! Not only is this a great money saving recipe, it’s delicious and so easy to make!

I chose to use whole milk when I made my yogurt, but the original post says you can use 2%. I also chose organic milk, since it has a longer shelf life.

The hardest part about the recipe is the waiting. It’s seriously so simple, but there is a lot of hands off cooking time. I was so eager to try it, but by the time it was done cooking, I was already in bed. Luckily Gary very kindly offered to put it in the fridge for me, where I found it for breakfast the next morning. 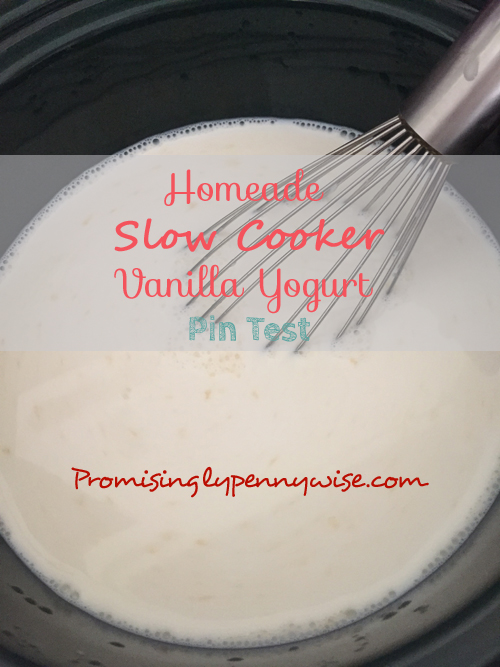 My favorite thing about this recipe is that it’s only four ingredients: milk, vanilla extract, a small amount of yogurt with live active cultures to get things started, and sugar. I actually chose to leave the sugar out since I knew I could always mix some in later. It turned out just like the plain yogurt I’ve purchased at the store, but so much cheaper. 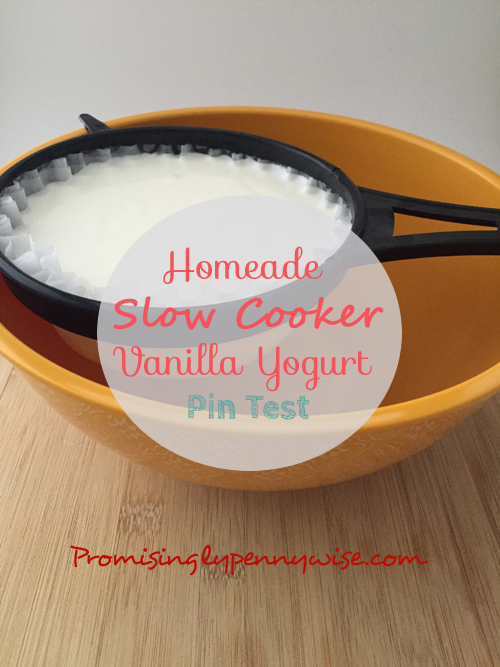 I also tried straining some to make a thicker yogurt. I used doubled up coffee filters, which worked well. I strained mine for about three hours. It wasn’t as thick as Greek yogurt, but I think with a longer straining time it would be pretty close. Now that I know that I’ll repeat this recipe however, I plan to invest in some cheesecloth to use next time.

To view the full recipe and instructions, head over to joyfullythriving.com or click here.