I was prepared to share a post full of pitfalls and setbacks about my attempt at testing different pumpkin preserving techniques, when the final setback convinced me it wasn’t meant to be.

My post about pumpkin preserving techniques has hit quite a few set backs. I tested three different methods: Preserving with a bleach solution, preserving with refrigeration, and preserving by immersing in water. The first setback hit when I promptly forgot which jack-o-lantern I had treated with bleach spray. After taking my best guess, I decided to label the bottom of the pumpkins so that I would remember in the future. The next morning the second setback struck.

After drying off the water-immersed pumpkin, I noticed that the carved portion was bowing away from the pumpkin. I gently pressed on it, trying to press it back to it’s former position. Instead, it snapped off. As I was attempting to reattach it with a tooth pick, another portion broke. Luckily I remembered that sewing needles are amazing at saving the day. I reattached the piece by sticking a needle into the pumpkin and the piece on top. It was still bowed, but at least it was there. Things seemed good from there on out…

Until I got up the next morning and realized the pumpkin I’d put in the fridge overnight was marked with a “B” for bleach… and the pumpkin marked with “F” for fridge was still on the counter. I guess labeling the pumpkins only works if you read the label.

Still, I was prepared to share a post about my blunders and what I learned, complete with pictures, when I realized that my camera was not in my pocket… it’s in Baby G’s room. Baby G, who is sleeping (hopefully for the night).

Here’s the only picture I have on my computer of the mini jack-o-lanterns I intended to use for this post: 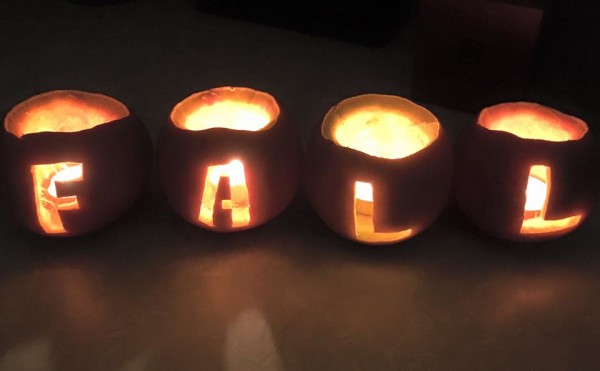 I know for a more reliable test each pumpkin should have been carved with the same letter, but I couldn’t resist carving FALL.

While my test may have failed, in my experience, I’ve had the best results with a mixture of refrigeration and water. Since it’s tough immerse a full size jack-o-lantern while keeping it in the fridge, I usually place my jack-o-lantern in the fridge, then drape a moist hand towel over the carved portion.

Looking for more information on preserving your jack-o-lantern? Though it didn’t share the refrigeration method or water immersion method, this post at myscienceproject.org is a great resource!