Recently Gary and I shared some very personal news with our Facebook friends. It was not a post I ever thought I’d write, not because I thought it would never happen to me, but because I didn’t think this would be part of our healing process.

We shared a post announcing our miscarriage. We shared the news with many who had no idea we were pregnant in the first place. It may have seemed like an odd thing to do, announcing a miscarriage for a pregnancy we had yet to announce. It’s certainly not the norm. Today I want to share why we felt it was what we needed to do.

Before I share our reasons however, I want to be clear on what this post is not. This post is not meant to imply that our reaction to loss is the right reaction or that this is how everyone should deal with a miscarriage. We all have our own way of grieving. For many, the loss of a baby is deeply personal and private. Many couples choose to share the news only with close friends. Some don’t share with anyone and weather the grief alone. How one person processes grief may be very different from another. And that is okay.

This post is also not an invitation to debate when life starts. I believe that life begins at conception, and I will write as such. If you believe otherwise, I ask that you respectfully refrain from comments meant to challenge my beliefs. This is not the time or place for that.
So why did we choose to announce our miscarriage on Facebook?

When we found out we were pregnant, we decided to tell immediate family and only a few close friends. We were eager to share the news with everyone. This was a planned pregnancy and we were thrilled about the growth of our family, but I knew the risk of miscarriage.

It’s something few talk about. Many people don’t realize how common it is. I only knew because when I was pregnant with Baby G I read everything pregnancy related that I could get my hands on. I understood that the risk of miscarriage greatly decreased once a heartbeat was detected. With Baby G, we announced our pregnancy via Facebook the day we saw the tiny flicker of her heartbeat on the ultrasound screen. We decided we would do the same with this baby, but we never made it to that point.

A week before our first doctor’s appointment I noticed some disturbing symptoms. A call to our doctor confirmed that it was possible the symptoms meant nothing at all, but we should take a trip to the local ER just in case. The trip left us in limbo. Blood work revealed that my HCG levels were low, and an ultrasound did not show the baby, but both could be explained if our dates were wrong and I was not as far along as we expected. It was possible that I was miscarrying, but it was also possible that everything was fine and just very early.

We prayed that that was the case, and went back for follow up blood work two days later. We received the news that my HCG levels, which should have doubled from 230 to 460, had instead risen only ten points, confirming that we were very likely experiencing a miscarriage.

We left heartbroken, and the miscarriage did follow. At that time, I had absolutely no desire to share the news of our loss. I wanted to grieve without having to worry about breaking the news to anyone else. So that day, I shared the news only with my very closest friends and mother. A friend of the family who counsels couples experiencing miscarriage recommended naming the baby, even though our miscarriage happened at an early stage. One of the cries of my heart after it happened had been the fact that I didn’t even know my baby’s name, so we decided to follow her advice and chose the name Valor.

After meeting with our doctor for a follow up appointment a few days after, I shared the news with the few family members I had not yet told. There was now no one else to tell, no more sharing the painful news, no one else knew I had been pregnant.

I thought that would be it, until the next evening when I sat chatting with a dear friend who did not know about the pregnancy. As she shared about her week, and I prepared to share about mine, I knew that I could not keep the miscarriage from her. The idea of blithely saying “I’ve had a pretty good week.”, the idea of acting as if a great loss had not occurred, as if we had not lost a dearly loved and wanted baby, outweighed the hesitation of talking about such sad news.

I realized then that in the following days, as I went about life, running errands, meeting with friends for baby play dates, going to church, I would face the same difficult decision: To act as if Valor had never existed and put on a happy face, or to have to explain the loss over and over. I didn’t like either option.

I shared my feelings with Gary, telling him “When we get pregnant again, I want to tell everyone right away. Then, if something were to happen, we could make an announcement instead of choosing between sharing the news repeatedly or acting as if we are not grieving.” I wished we had done that this time.

Gary asked, “Should I post something now?” We prayed about it, and decided that for us, it was the right step to take.

“We had hoped this announcement would be one of celebration, but instead it comes with a heavy heart. Last week, we lost a child. Obviously we are mourning the loss, but we are doing okay. We named him/her Valor Elisha _______ and look forward to the day when we will meet. Thank you for your prayers.” 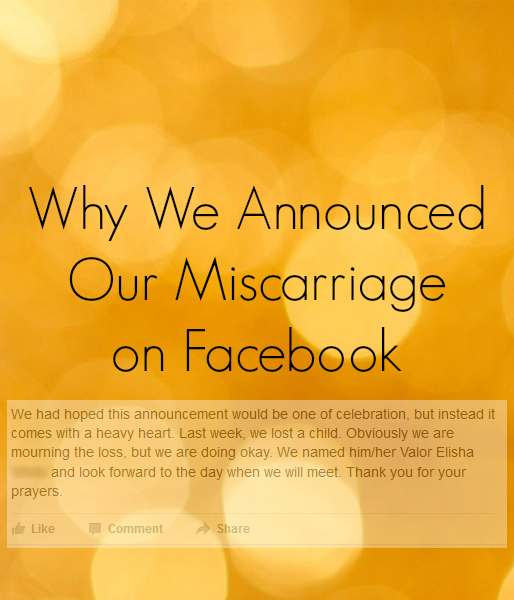 So now that we’ve done it, what are my thoughts? I’m glad we did it. It wasn’t easy to open our hearts to so many people, but it was needed. We wanted to honor the fact that Valor existed, and though we never knew him or her, they are missed and loved.

We were touched by the outpouring of support we received, and we realized just how many people we know who have been through a loss themselves. Family and friends, who had experienced losses unbeknownst to us, reached out to offer words of comfort and support.

If you’ve experienced a loss, no matter what stage of pregnancy you were in, know you are not alone. We were fortunate that our loss happened early on; many people I know have experienced loss much further along in their pregnancy. No matter the stage you were at, your grief is valid and sharing it with someone may help. Whether you choose to share with a close knit group of friends, your pastor, a mentor, an online support group, a pregnancy loss forum, or with all of your Facebook friends as we did, I hope you find that there is a wealth of supportive people who understand your grief.